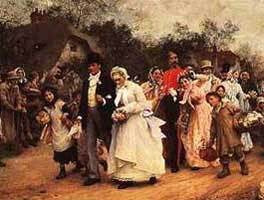 What was considered the Marrying Season in Ireland and what was it called? Well into the 20th century, the busiest time for match-making in Ireland began right after Epiphany - January 6th. This was because the Irish had misinterpreted a Church ruling set forth in November, 1563 which prohibited weddings during Lent. The popular reasoning that evolved from this decree was that if you could not marry during Lent, then you had to marry before. Thus, it was taken for granted that Shrovetide was the proper time to marry and Shrove Tuesday - the day before Ash Wednesday - became the most favored day of all.

We have been asked to notify you when Mikelle & Lein's Wedding Images are on line
no thanks
Thank you for signing up!
Close
Loading More Photos
Scroll To Top
Close | Clear All & Close
Close Window
Loading
Close